It started as a sisterly bonding time getting pre-baby pedicures. Everyone knows you need a good pedicure before you go into labor right? Well what began as a good idea turned into a ridiculously shameful moment. Apparently my brain still isn’t working properly because I decided to wear my skinny maternity jeans to the nail salon.

As I sat down in the pedicure chair I realized I had to hoist up my jeans to my knee in order to submerge my feet and ankles in the water. They were quite tight so I had to tug on them pretty hard to get them past my calves. They are skinny jeans afterall!

After an hour long foot massage and pedicure, we were moved from our chairs to the drying station. As I started to pull my jeans back down to my ankles, I realized they were pretty tight. Like really tight. I whispered to Hannah if she could help me since I can barely reach past my knees anyway! She laughed as she started pulling on my jeans. Then I started laughing because they WOULD NOT BUDGE. Hannah kept telling me to stop laughing so she could stop laughing in order to focus on pulling!

As this was happening, the 2 girls that did our pedicures came over to see what was going on. Hannah explained through laughter as I could feel myself turn bright red and HOT. I knew my body temperature was NOT going to help my legs from being swelled up but I started to realize this was a lost cause. I was going to have to take my pants completely off which would ruin my new pedicure or cut my jeans. Hannah must have had the same thought because she suggested we ask for a scissors. The 2 girls gave us one as they giggled and watched. At that point I knew it was either my jeans or my dignity walking out the door. So I surrendered to the scissors and laughed with them all as Hannah cut the seam on my jeans. She couldn’t cut the second seam so one of the girls stepped in and grabbed the scissors from her. At that point all I could imagine was myself being a stuffed turkey being cut for Thanksgiving dinner.

Apparently Hannah grabbed my phone in order to document the catastrophe. And well if there’s a picture floating around then you might as well share the story right?? 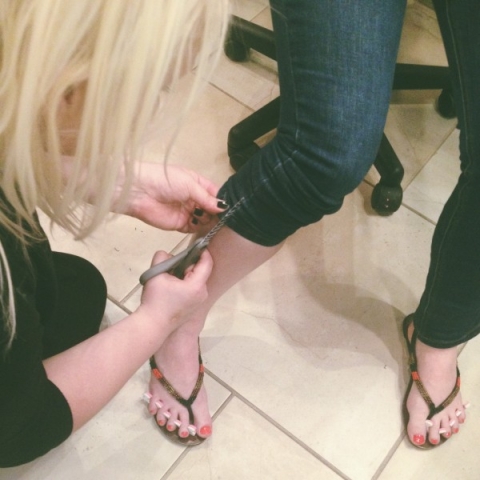